As the 5th largest city in North America and the major gateway to Canada, Toronto is easily accessible by air, car and rail. And no matter what your mode of transportation, getting to GreekTown is even easier. 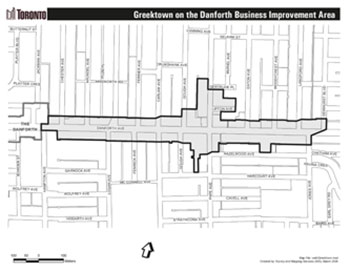 You may need the free Adobe Acrobat Viewer

GreekTown on the Danforth is conveniently located on the Toronto Transit Commission’s (TTC’s) Bloor-Danforth Subway line and can be accessed through any of our three subway stations: Chester, Pape or Donlands. Toronto’s subway system is safe, reliable, and convenient and operates Monday to Saturday from approximately 6am to 1:30am, and Sundays from 9am. Please call (416)393-INFO(4636) for schedules and fare information.

GO operates commuter trains and buses that link suburban and outlying communities to downtown Toronto, as well as other routes. Union Station is the central hub of the GO system and from here you can hop on the TTC to get to GreekTown easily by subway. For fares and information call 416-869-3200, or 1-888-GET-ON-GO.

GreekTown is located on Danforth Avenue, one of the major arteries running east and west through Toronto. We are a few minutes east of the Don Valley Parkway, also called the DVP, which connects with the QEW Gardiner Expressway to the south and the 401 highway to the north. Once on the Don Valley Parkway, take the Bayview/Bloor exit, follow the signs for Bloor Street/Danforth Avenue and then travel eastbound. Limited street parking is available along Danforth Avenue itself, as well as a number of municipal public parking lots located within one block north and south of Danforth Avenue between Chester and Jones Avenues. (Specific parking lot locations are shown on the area map above.) Because Danforth Avenue is a major thoroughfare in and out of the city, parking on the street is prohibited during rush hours. Do not park your vehicle on the north side of Danforth Avenue between 7am and 9am, Monday to Friday, or, on the south side of Danforth between 4pm and 6pm, Monday to Friday.